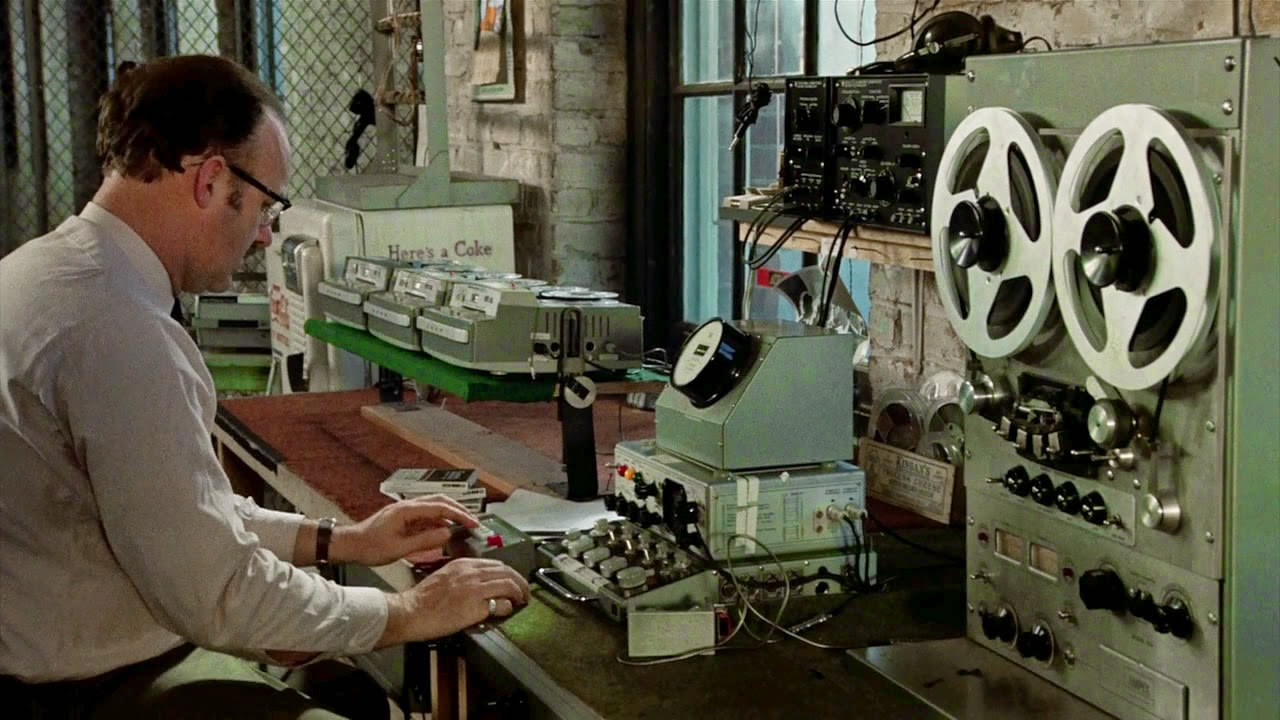 In 1974, Francis Ford Coppola was coming off the greatest success of his career - The Godfather, and was working on its hugely successful, and some would say superior sequel, The Godfather Part II. In between these two enormous cinematic treasures, Coppola directed a smaller, but still masterful psychological thriller called The Conversation.

The Conversation, taking its themes from Michaelangelo Antonionni's classic film Blow-Up (1966), centers on a surveillance expert named Harry Caul, played by Gene Hackman. Caul's latest job, to wiretap a couple in the middle of Union Square in San Francisco, takes him on a wild journey into paranoia, hallucination, and a murder plot that causes him to lose his mind. The film's taut suspense is well crafted by Bill Butler's subtle cinematography, reminiscent of Edward Hopper paintings, Walter Murch's brilliant sound design, and David Shire's incredible piano inspired score. But the true spirit of the film is that it is a portrait of a sad, lonely man who is driven insane by his own genius. He is the Beethoven of wire tapping. And eventually, it drives him crazy.

Hackman, playing against character, spends the entire film in the same bland costume; a button-down shirt and tie, rain coat, and out of style glasses. He has a lover, played by Teri Garr, but awkwardly dismisses her feelings for him when she wants more information about Harry's life. Caul is a private person, who lives by simple means. His work is his life, which, ironically sometimes involves creeping into the personal lives of others. He leads a very quiet existence but also carries dark secrets from his past which come back to haunt him.

The Conversation was released at a time that America was still reeling from the Watergate scandal, and conspiracy thrillers were abound in Hollywood. Other great thrillers of the period were Three Days of the Condor, The Parallax View, and All the President’s Men.

Coppola was also in the midst of one of the greatest artistic periods of any filmmaker that ever lived. In 1979, he directed the controversial Vietnam epic Apocalypse Now. He followed it up with an expensive flop, the 1982 drama One From the Heart. The film ultimately sank Coppola's production company, American Zoetrope and Coppola never truly recovered, despite directing the third part in the Godfather trilogy several years later and other modestly successful films like 1992's Dracula. Coppola still resides in the San Francisco/Napa Valley area today, and runs a successful winery called Francis Coppola.

The superb cast of The Conversation also includes Harrison Ford, Robert Duvall, and the late, great John Cazale.
Posted by IG at 7/12/2014