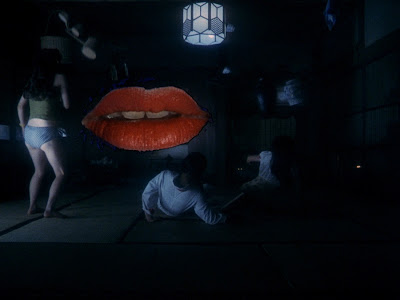 Where does one begin in reviewing and discussing Nobuhiko Obayashi’s 1977 cult film House? It is, without a doubt, one of the most unique films you will ever experience. I was fortunate enough to see it on the big screen, in all its bizarre glory. Being the type of person who rarely watches trailers, and previews, I had little to no knowledge of what I was in for. I thought I was going to see what I heard was a Japanese cult horror movie. It was definitely Japanese, it’s definitely a film deserving of a cult status, but I’m not sure what genre this film fits into. Horror? Thriller? Comedy? Experimental? All of the above?

Obayashi was clearly aiming to create a subversive and out of this world mash up of styles and genres with a touch of 1970s camp a la Pam Grier-type blaxploitation films. With its prolific use of music typical of films of that genre, in addition to a score that features classical piano pieces, it succeeds heavily in creating a multi-layered piece of art. It’s abilities to shock and fright were unmistakable, but the attempts at slapstick humor felt slightly out of place.

The film surrounds a group of female classmates who go on vacation to the residence of one of the girls aunts. The aunt turns out to be a psychotic killer who eats one of the girls, and who’s household objects, a piano, and a lampshade among them, eats the other girls alive as well. It is an insane experience to say the least. It mocks films of other genres (an especially hilarious scene makes fun of the “prince riding in to save the princess on a white horse”), while mocking itself as well.

You never really know what to expect from House, known as Hausu in its native Japan. Sometimes is very thought provoking and scary, mixing beautifully artificial set designs with imaginative cinematography, and tricky editing techniques. Other times, it is oddly humorous, and features sequences that feel like something out of an old Three Stooges routine. What the director was aiming for with this odd arrangement of styles is beyond me. Perhaps he was going out of his way to make something really crazy and different from everything else at the time, even if it hurt the film in the end.

The director did succeed in his goal-he made a film that makes you feel like you’re trapped inside a kaleidoscope or a nightmare you cannot awake from. To sum it up, the movie is incredibly weird and wonderful and eccentric and unlike anything I’ve ever seen. If you’re looking for something really different to watch, try House.
Posted by IG at 4/24/2010