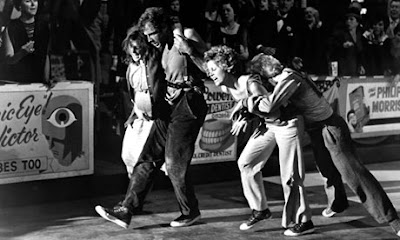 They Shoot Horses, Don’t They? is Sydney Pollack’s breakthrough 1969 film about a dance marathon contest taking place in 1932. The film stars the incomparable Jane Fonda, as well as Gig Young who won an oscar for his role and Bruce Dern, who would later co-star as Fonda’s husband in Coming Home, another forgotten classic made about a decade later.

They Shoot Horses, Don’t They? might not sound like it, but it is an incredibly insane story about a group of incredibly insane characters. It takes place during the depression, when people have lost hop altogether, and attempt to escape the misery by going to the movies, or, in this case, escaping to see an arena where dozens of couples dance. Continuously. Non-stop. For days and weeks, and months.

Fonda gave several memorable performances in her career, winning two academy awards, one for Klute, and one for the aforementioned Coming Home. They Shoot Horses, Don’t They? is amongst her best work as well. It is a fast-paced, exhilarating, and disturbing portrait of various people who are desperate for different things. Some look for fame. Some look for money. Some look for escapism. Some look to entertain. Some look to be entertained.

Pollack went on to have a glorious directorial career. He directed Robert Redford in the paranoid 1975 classic, Three Days of the Condor. He also went on to director Dustin Hoffman in 1982’s Tootsie, and he hit his career peak in 1985, re-teaming with Redford and Meryl Streep in the Best Picture winning epic, Out of Africa.

However, it is They Shoot Horses, Don’t They? that I think is one of Pollack’s most unique films. It centers on Fonda who enters into a contest to see which male/female couple can dance the longest time. Young stars as the host of the contest, a sleazy, selfish showman whose only prerogative is to entertain the audience, no matter what the cost is.

Fonda triumphs, as does Susannah York who stars as an aspiring actress paired up with her boyfriend. The script is masterfully written, filled with witty dialogue that is not curbed considering the time period its set in. The film is something that only the late 1960s could produce, an original and scary piece of cinema. Also, a bit of trivia: it is the film with the most Academy Award nominations without a nod for Best Picture as well, with 9 total nominations. It won only one, for Young’s performance.
Posted by IG at 4/03/2010