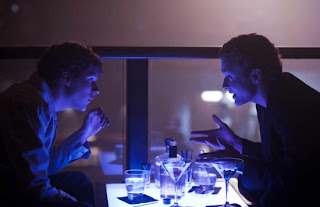 The Social Network is a David Fincher film. No, no, I mean it is a David Fincher film. It has all the qualities of a Fincher movie. The script was brilliantly penned by Aaron Sorkin, who is quickly becoming one of the, if not the best screenwriter in the business. The performances were well directed and nuanced, headlined by the amazing Jesse Eisenberg who should rightfully receive an Oscar nomination. The shots, the music, the timely social topics are all brands of Fincher’s filmmaking style.

We all know what the film is about. It’s about Facebook. The $25 billion sensation (as of this writing), the website that has attracted 500 million users worldwide (again, as of this writing), and perhaps the biggest thing since sliced bread itself. Facebook first went online in the winter of 2004. Originally it was spearheaded by best friends Mark Zuckerberg and Eduardo Saverin. Within the year however, Zuckerberg took majority control of the company and drove out Saverin which lead to a huge lawsuit and an out of court settlement. However, the heart of the movie lies in the simple question of whether or not Mark Zuckerberg stole the idea for Facebook from a couple of Harvard students who approached him with a similar idea. In late 2003, Zuckerberg was approached by the Winklevoss twins, a set of athletic rowing men who came from a privileged family. Supposedly, while he was developing their idea into a site, he was creating his own website called “The Facebook”. After two months, the site was finished and up and running. Once the twins got word of this, they brought on a lawsuit as well which ended with a $65 million settlement.

The movie answers the question and doesn’t answer it at the same time. It makes Zuckerberg out to be an ambitious punk, but not necessarily a thief. Justin Timberlake stars as Sean Parker, the inventor of late 90s music sharing company Napster, who served as President of Facebook for a short while before being ousted after a cocaine bust at a party he attended. Timberlake does a great job in his limited role and has certainly evolved from baby-faced pop icon into an actor of serious note. Another stand out performance can be found in the Eduardo Saverin character who was portrayed by Andrew Garfield, a young brit who has yet to make his big splash. He does wonders with the role, and it will be interesting to see what he does with his career in the future.

As for Fincher, The Social Network is his best film in a long time. It is a timely, socio-political topic that the masses can understand and want to understand.

The awards season is young, and there are many films to look forward to. But The Social Network is the best film of 2010 thus far, and will certainly rack up the nominations when the Oscars roll around next year.
Posted by IG at 10/02/2010