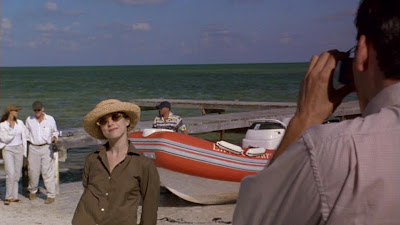 Who in the world is what they seem?
-Susan Ricci

"The Spanish Prisoner" is a con game that dates back to the 19th century. Typically, the con man informs a victim of a wealthy man held prisoner in Spain. The con man then convinces the victim to put up funds to rescue the wealthy man in exchange for a larger sum of money once the prisoner is released, as well as obtaining the hand of a young, beautiful woman, typically the wealthy man’s daughter. The con game ends once the victim has been cleaned or realizes that he has been duped from the beginning. Writer/director David Mamet uses this con game as the basis of his 1997 film The Spanish Prisoner.

David Mamet is a master of words. He is perhaps the world’s foremost playwright, and has been one of the most successful writers of the last four decades. He rose to fame in his native Chicago in the 1970s with such works as Sexual Perversity in Chicago (later adapted into the 1986 Edward Zwick film About Last Night), and American Buffalo. In the 80s he followed it up with Speed-the-Plow, starring his frequent collaborators Joe Mantegna and William H. Macy, Glengarry Glenross, and also began writing scripts for movies such as the 1982 Paul Newman vehicle The Verdict, for which he was won an Oscar nomination for best Screenplay. In 1987, Mamet made his directing debut starring his then-wife Lindsey Crouse, House of Games. The film marked the beginning of one of the most underrated filmmaking careers in recent memory. It also set the tone for Mamet’s most consistent theme – the art of deception. In the 1990s, Mamet continued to write and direct, including Oleanna, an adaptation of his acclaimed play, and The Winslow Boy, which he directed in 1999. Mamet divorced Crouse and married actress Rebecca Pidgeon in 1991, who has subsequently starred in every single one of Mamet’s films. Mamet’s crowning achievement of the decade was however, The Spanish Prisoner, which in addition to Pidgeon, starred Campbell Scott as a naïve, young inventor, Steve Martin in an uncharacteristically serious role as the man who tricks him into handing over an extremely valuable “process” that he has invented for his company. The film also stars Felicity Huffman as an FBI agent, Ben Gazzara as Scott’s boss, and Mamet regular’s Ricky Jay and Ed O’neill in supporting roles.

The first thing that needs to be said is that David Mamet is a master of words. He is an artist of the American language. He is not a filmmaker whose aim it is to create an arty film, or a visually satisfying film. His main objective is to twist around words to the degree that while we are still aware that is English being spoken, it nonetheless remains far beyond our basic understanding of it. There is no other American filmmaker who packs as many twists into one film as Mamet does with his work, particularly with The Spanish Prisoner. Sometimes, I admit, the twists are too much, even for Mamet’s good.

Mamet’s films are not enigmas that need be unlocked. They are not films that require analysis in order to uncover a greater truth. The thing about Mamet is that he does the work for you and uncovers all there is to uncover by the end of the film. That’s what makes his work enjoyable to watch. You are intrigued by the mystery, and know that by the end of it, nothing else will be required of you, because all will be revealed and completed.

Mamet has directed few films the last few years. Since 2004, he’s only made one – the fantastic Redbelt, another film that centers on a rug being pulled from under everyone’s feet, most of all, the audience’s. He has gone back to doing mostly plays, although he has plans to direct another film in the near future, Come Back to Sorrento, once again starring his wife, as well as William H. Macy and Felicity Huffman, whom he has worked with several times already.

Oftentimes, such films go unnoticed. Movies that are entertaining, intriguing, thought provoking, and enigmatic. They feature great casts, are written by talented and well-known authors, and directed by high profile filmmakers. Yet they fly under the radar and remain lost amidst film archives. I wish I had the answer to this question, but I am afraid I don’t possess it. That might just be the answer. There is none.
Posted by IG at 1/29/2011