COME BACK TO THE FIVE AND DIME, JIMMY DEAN, JIMMY DEAN (ROBERT ALTMAN, 1982) 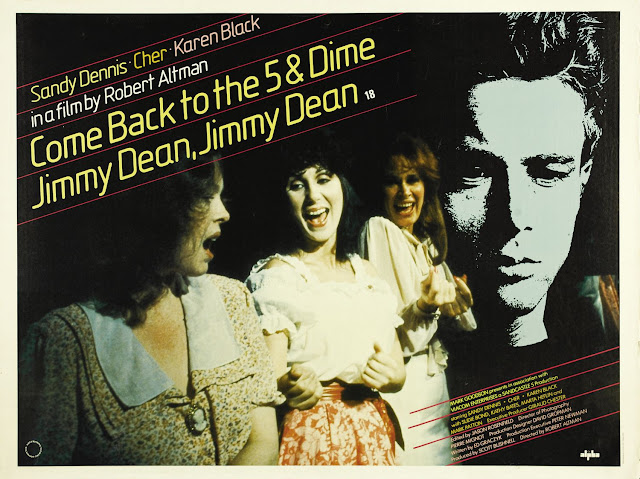 It’s a film that touches upon social issues, femininity, homosexuality, false identities, and the fleeting illusion of fame. It's one of Altman's most interesting pieces, a film which limits the boundaries of cinema and takes place entirely in one location juxtaposing two very distinct time periods, the 1950s, a time when Elizabeth Taylor and Rock Hudson grabbed all the headlines, and muscle cars and Elvis Presley ruled youth culture, and the 1970s, when the U.S. was in a recession during one of America's darkest periods, following the Vietnam war and the Watergate scandal. It was a time when many realized that the dreams of the past had evaporated, and all that was left was a country in decline.

Altman, directing the picture in 1982, uses the hindsight afforded to a filmmaker who chronicles events of the past, to remind us that the past can be an ugly creature, and that change is inevitable. The nostalgia and 50s doo-wop atmosphere add a special ambience to a story filled with emotions and unsolved issues between old friends.

Especially terrific are Sandy Dennis as a forlorn woman in her 40s, still obsessed over her teenage idol and unable to let go of the past, and Karen Black, whose character is the most normal of the bunch, yet holds the biggest secret of them all. Dennis, mostly known for her Oscar winning turn in Mike Nichols’ Who’s Afraid of Virginia Woolf? proved to be terrific as a James Dean extremist in another ensemble film, a role she originated (along with the other cast members) on stage.

Altman, known for his varied work such as MASH, McCabe and Mrs. Miller, Nashville, 3 Women, The Player and Short Cuts, delivers one of his most underappreciated yet profoundly shocking films which he also, briefly, brought to the stage on Broadway the same year of its movie release. Come Back to the Five and Dime, Jimmy Dean, Jimmy Dean is exactly the type of film Altman tried to perfect throughout his career, the type of film that moves around like a snake, irksome, and unraveling secrets that otherwise weren’t expected to be unraveled. In his 1982 review of the film, Roger Ebert began by saying “If Robert Altman hadn't directed this movie, the reviews would have described it as Altmanesque. It's a mixture of the bizarre and the banal, a slice of lives that could never have been led, a richly textured mixture of confessions, obsessions, and surprises.”

Although the film has yet to have a DVD release, it has still gained a cult following over the last 30 years and was the first dramatic performance of Cher’s movie career. It was recently restored by the UCLA Film & Television Archive and still manages to screen at art houses around the country.
Posted by IG at 2/01/2012