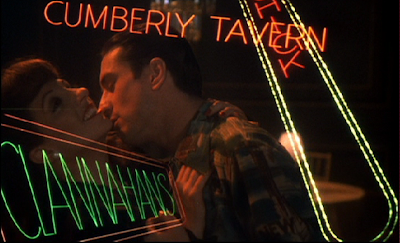 The next film I’d like to talk about is Martin Scorsese’s throwback musical film, “New York, New York”.

“New York, New York” has the great distinction of being the one film that Scorsese directed in between what now seems to be his two most acclaimed and perhaps the two best films of his illustrious career. Released in 1977, right in between 1976’s “Taxi Driver” which made Scorsese one of the top directors in the movie biz, and 1980’s “Raging Bull”, “New York, New York” was Scorsese’s attempt at making an old-school style musical starring his frequent collaborator at the time, Robert De Niro and the always lovely Liza Minnelli.

The film works on a very slow level. The story unfolds in a leisurely yet thoughtful manner. I’m not a fan of musicals, but the music in this film was divine. Liza, with the exception of her Oscar winning turn in 1972’s “Cabaret” has never been better. Scorsese’s pace in the film is a slow one, as mentioned before, and it is quite a long film, clocking in at 163 minutes, but the film stands out as Scorsese’s “lost film”, the least-known of his during his peak of the 1970s which also included his break-out film “Mean Streets in 1973 and the Ellen Burstyn-starrer “Alice Doesn’t Live Here Anymore”, for which she won the academy award for best actress, in 1974.

De Niro excels as usual. In “New York, New York”, he portrays a jazz musician who pursues a strong-willed and independent singer, played by Minnelli, and the film chronicles their rocky relationship that unwinds over the course of several years during post-World War II.

The story takes them from small nightclubs to large arenas, as they tour the country together, meanwhile they fall in love and get married. Of course, this all sounds so pretty on paper. But Scorsese deals with the characters and story in a dark manner. De Niro’s character, while deeply in love with Minelli, also harbors a wild temper and bold ambition as he tries to take the reins of the orchestra band they are a part of.

The music and staging, is of course, spectacular. In fact, and call me ignorant on this, but I never knew that Sinatra’s famous “New York, New York” rendition is actually a cover of the song that Minnelli originally sang for this movie. The reason this film has flown under the radar for so many years might be a result of the failure of the film in its initial release. Perhaps this is due to the fact that at the time, in 1977, people were simply not interested in a dramatic musical, even if it was directed by Martin Scorsese and starring Robert De Niro and Liza Minnelli. Instead film-goers spent their money on “Star Wars”, “Close Encounters of the Third Kind”, and “Saturday Night Fever”.

It is not a perfect film, however. One giant flaw in the movie is the poor set design. Every set looks artificial and like something out of a cheap B-movie. Also, the film runs too long, and easily could have been edited down at least 15 or 20 minutes. But in his introduction to the 2005 DVD edition of the film, Scorsese explained that he intended the film to be a break from the gritty realism that he had become famous for, and saw the film as an homage to the musicals of classic Hollywood, which would explain the cheesy set designs.

Despite the flaws, the performances are top notch and the musical climax was extraordinarily filmed and performed. De Niro reportedly even learned how to play the saxophone to get into character, and his portrayal of an egotistical, self-centered and manipulative jerk is nothing short of amazing.

The film, however, was doomed from the get-go, as it ran over budget, and was fueled by drugs, egotism and infidelities. In an insightful 2004 London Times article on the making of the film, it mentioned how Scorsese had become depressed and turned into a cocaine addict, and Minnelli whose father-fixation led her to have an affair with Scorsese while both were still married to other people. After the film was finally released and flopped, Scorsese went deeper into depression and drugs. It was De Niro who approached Scorsese in the hospital, with a book he thought Marty would like to read and perhaps even make into a new film. It was called “Raging Bull”, by Jake La Motta.

Despite the infamy of the production and back story of “New York, New York”, and despite it being the oddity among Scorsese’s extensive career and better known films, it is definitely still worthy of a look.
Posted by IG at 11/23/2009