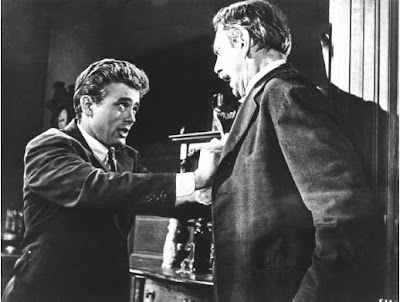 East of Eden was released in 1955 and directed by legendary filmmaker Elia Kazan. Kazan was responsible for “finding” Marlon Brando, and casting him in some of the most successful films of the 1950s, A Streetcar Named Desire, and On the Waterfront. A few years later, once Kazan had enough clout to pick and choose whatever project he felt like, he decided to adapt John Steinbeck’s epic novel East of Eden in 1955. However, due to the enormity of the novel, Kazan decided only to focus on the last part of the book. Initially wanting his go-to guy Brando to play the lead role of Cal, a confused and frustrated teenager growing up on a farm in 1917 California, Kazan eventually realized that Brando was a tad bit old to play the role of a teenager. Instead he chose to cast a relative unknown in the role, after seeing some of his stage performances and being impressed by his talent. The young man in question? None other than James Byron Dean.

You all might have heard of this fella’ named James Dean. He was supposed to be the next great actor to come out of the 50s. The next Brando. He worked with the top directors of the 1950s-Elia Kazan, Nic Ray, George Stevens. And that actually was it. Most of you know the tragic story of Dean. A good lookin’ kid from the Midwest, a stage actor in his early 20s, an overnight movie superstar in his mid 20s, and then, it all came crashing down. Literally. On September 30th, 1955, James Dean died in a motor vehicle accident. He had completed three films at the time of his death, but only one, East of Eden, did he manage to live to see on the big screen. The others, Rebel Without a Cause, perhaps the film he’s best known for, released a month after his death, and Giant, which was released a year later, in 1956. He would be nominated posthumously for two Academy Awards, one for Eden, and one for Giant, becoming the only actor to receive multiple Oscar nods posthumously. Although he lost both awards, his legacy was secured the night he died. That baby faced, 20-something kid who walked around, just oozing with cool, would become an immortal.

Dean’s first film, East of Eden, was loosely based on Steinbeck’s own family upbringing deals with two families, the Hamiltons and the Trask’s. However, the film separates itself from the novel by dealing with only the end of the book, in which the Trask’s are in the spotlight, particularly the relationship between father Adam and his two sons Caleb, Cal for short, and Aron, a variation on the biblical tale of Cain and Abel. Dean is magnificent and probably brings home the best performance of his short film career. The tension between Dean and the actor who played his father off-screen is visible in the film and was exploited by the director to get better performances out of the actors.

Dean always had the talent to play lost, and confused youths, troubled, misunderstood young rebels, and tragic heroes. You could say that Dean was a misunderstood rebel in real life. Known as a snotty, young, up and coming actor, he was warned by Alec Guinness (he played Obi-Wan Kenobi in Star Wars) on the set of a film a week before Dean’s fatal car accident that unless he gets rid of his new Porsche, he’d be dead within a week. Sadly, Guinness’ quasi-joke came true. Dean will always be remembered as that ultra-cool rebel from several 1950s classics. No matter how old we get, he’ll always be that 20-something kid from the movies. It is a shame that he passed away so young. Several of his contemporaries such as Paul Newman went on to great fame and long careers. Dean, on the other hand, came into the movie world and departed the real world in less than a year’s time. It brings to mind that old quote by Jean Paul Richter - “Death gives us sleep, eternal youth, and immortality”. Dean was able to accomplish all three in one instant.

Dean nonetheless leaves behind a great legacy of work. His debut film, East of Eden might be his best. And perhaps if he had lived, the extraordinary performance he gives in the film might have granted him a similar legacy, one that was based on his talents as an actor, rather than one that was overshadowed by infamy and tragedy.
Posted by IG at 11/28/2009