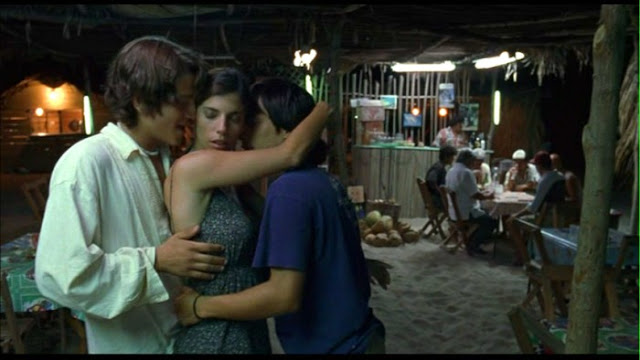 I decided to go with a foreign film for this particular review. Y tu Mamá También is one of my all time favorites, maybe my all time favorite foreign movie. It is a Spanish-language film from writer/director Alfonso Cuarón and was released in 2001 to rave reviews.

But what can I say about this movie that hasn't already been said? I'm about eight years too late to say anything new or refreshing about it. I'm eight years too late to give it a great, raving review, because I'd be about the millionth person to do so. But, like with so many great movies of the past, it’s impossible to praise a film of this magnitude in a new or unconventional way. So I'll just do it in an old and conventional manner.

The film is beyond words really. It was funny, it was sad, it gave me chills sometimes. The movie is one of the rarest ever, one that has everything; romance, drama, comedy, great acting, brilliant camera work, and one of the wittiest, yet profound written scripts to come around in a long time. The story revolves around two teenage boys, best friends since childhood, who decide to take a road trip with an attractive, slightly older woman, who just found out her husband cheated on her. Bent on quasi-revenge and just wanting to live life to the fullest as a new, free woman, she decides to awake the boy’s sexual desires in ways they never imagined possible. It’s a funny, witty film, yet it’s filled with a lot of drama, sadness and ultimately, tragedy.

There is one particular scene that is absolutely mesmerizing; I will probably never forget it as long as I live. It is a scene near the end when the characters spill their guts out about their various trysts, while drunk out of their minds at a beach side café. The scene lasts about 10 minutes and is completely uncut. The actors do a superb job of revealing their deepest, darkest, and funniest secrets about the girlfriends in their lives. The lead actress, who is permanently ingrained in my memory now, performs a seductive dance looking straight at the camera, as if, looking at the audience and seducing us the same way she seduced the boys in the film.

Y tu Mamá También is a unique work of art. It came at a time when film was changing. The 90s ended with joy and sadness in the movie world. New filmmakers emerged (David Fincher, Sam Mendes, P.T. Anderson), while others passed on (Akira Kurosawa, Stanley Kubrick). But once the 00s began, Hollywood went from being dominated by popular indie hits from Quentin Tarantino and Kevin Smith, to dominating the indie world with endless movie reboots from the past and franchises derived from kids books, amusement park rides, and animated stories.

But the director broke through barriers by creating a film that can be appreciated by a wide audience. Cuarón created a film that is universal. It features wonderful directing, a stylish script, and a refreshing story that was never lost in translation, as some foreign films are sometimes. Cuarón followed up his small, yet brilliant $5 million movie made in his native country, with an installment of Harry Potter, a $130 million big Hollywood production, and the futuristic thriller Children of Men, which netted Cuarón two Academy award nominations.

Y tu Mamá También is a timeless movie, and one that will live on forever. As people discuss The 400 Blows and The Graduate and Annie Hall, and other generation defining classics like them today, there remains hope that they will talk about Y tu Mamá También in the same fashion 10, and 20 and a 100 years from now.
Posted by IG at 12/03/2009