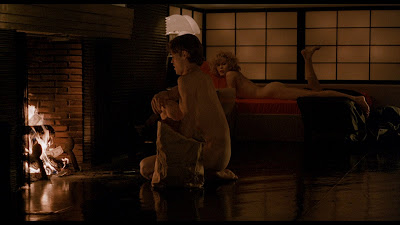 William Friedkin’s criminally underrated 1985 cop drama is to the L.A. scene what his famous Oscar-winning film The French Connection was to the New York scene. Friedkin, with that film and his infamous follow up, The Exorcist, both a waning memory at this point in his career, turned to the kind of film he does best-a gritty portrait of con men, and the cops who stop at nothing to chase after them. The cop in question is played by William Petersen, now of CSI fame. The con man, played by a young Willem Dafoe, is a counterfeiter, sly as a fox, and smart as one too. The film’s centerpiece is an incredible, high octane car chase sequence, one that not only rivals the classic chase scene in The French Connection, but one that might stand out as the best one ever put on film. The movie has just the right amount of drama, sexiness, action, violence, tension and ultimately, a jaw dropping conclusion you’ll never see coming.

To Live and Die in L.A. is underappreciated for several reasons. One, it doesn’t star Gene Hackman, who is probably one of the 10 or 20 greatest actors of all time, who headlined Friedkin’s previously successful French Connection. Two, it didn’t win the best picture at the Academy Awards. In fact it got nominated for exactly zero Oscars. It also didn’t come at a time when film was changing. Back in the early 70s, Friedkin’s peek, the old ideals of Eisenhower and the 50s were being thrown out. The new ideals of LBJ, and Nixon were in. Rock n Roll ruled the airwaves. Sex was in. Drugs were in. And movies like The French connection, which mixed clever storylines with fast paced action, made it a staple of the generation. But in the 1980s, these kinds of movies were being made less and less. It was all about Star Wars and Indiana Jones and Back to the Future. Basically, the formula for the franchise type films that rule the industry today was laid out 25 and 30 years ago. Friedkin drove himself into oblivion after The Exorcist premiered to rave reviews and shattered box office records too.

He decided to direct a remake of the classic The Wages of Fear, this time called Sorcerer. It was a flop. Three years later, he made a film with Al Pacino called Cruising, a brilliantly dark and seedy tale of a cop who poses as a gay club-goer in order to find a killer who goes after gay men. During filming, it was boycotted to the point that every scene had to be re-dubbed due to the excessive amount of noise during shooting, which mostly took place outdoors around New York City. The movie also flopped. Freidkin finally went back to basics with To Live and Die in L.A. in 1985. It might be his best film, if not for the sheer madness that is The Exorcist, and I mean that in a good way. It’s a film that opened my eyes to the ways the public can ruin a great film, to the point of complete obscurity, as well as vault a film to the top of popularity. Friedkin crafted together a fantastic and original story, filled with real characters with real emotions, as well as a fast paced cop thriller, with great car chases, and a particularly super-hot love scene which I think is so much sexier and cooler than 99% of the ones you see in movies today.

And then there’s the ending, surely one of the best ever, which, even if you end up hating this film for whatever reason, is essentially worth seeing the film on its own. William Friedkin is definitely one of the more forgotten filmmakers of the late 70s and 80s, but with the transition that came with the changing of the decades, it’s definitely not surprising and Friedkin is not alone. Other great filmmakers who lost a lot of respect and admiration in the 1980s include Hal Ashby, Michael Cimino, Peter Bogdanovich, and Robert Altman. Friedkin continues to make films every few years but his career never recovered and L.A. remains his last brilliant effort.
Posted by IG at 12/16/2009