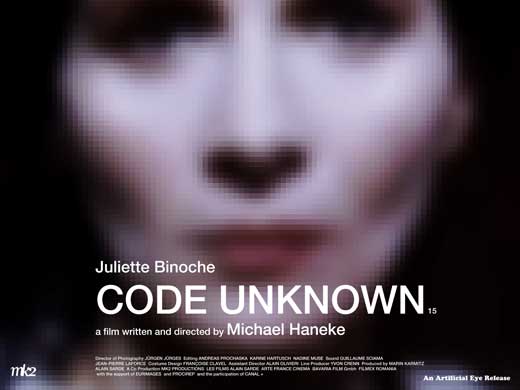 Michael Haneke’s Code Unknown: Incomplete Tales of Several Journeys opens with a curious and unsettling sequence. A little girl, not older than 9 or 10, stands in front of a white wall, with a frightened look on her face. She slowly takes a step back, then another, and then another. She reaches out to the wall, trying to clutch it with her right hand. Finally, she kneels down, scared beyond wits, tears forming in her eyes, and stops moving. She looks directly at the camera the entire time. Then she stands up and the fear disappears from her face. It was a performance. It was fake.

The intention of the scene goes back to Michael Haneke’s specific style. His films aim to disturb you. He takes on stories other filmmakers don’t, and that makes his characters stand out. This opening scene is strange though. It has nothing to do with the rest of the plot. The little girl is never shown again. She never has a spoken line of dialogue and we never get to know her name. She is a ghost to us; A minor character. What is her purpose then?

Code Unknown's opening sequence is both creepy, and seductive. It leaves the viewer feeling anxious and uncomfortable. The framing of the scene is left very open. Nothing is seen except for the young girl, and the wall that’s behind her.  We are meant to question the placing of this scene. Why is the little girl in the movie? Why is she in the opening shot? What is she doing in the shot? Is it foreshadowing? This is Haneke’s style. It is unique, and unnerving.

The film's plot is scattered, and its characters are loosely connected. Juliette Binoche plays Anne, an actress whose boyfriend is a photojournalist who works in odd ways. His younger brother gets into an argument with a black man whose African family struggles to adapt to city life in Paris. There is also a homeless woman who is deported, and attempts to sneak her way back into the country.

Haneke’s films mostly leave a bad taste in your mouth. This is not Woody Allen’s idea of Paris. It’s not Godard’s Paris either. This is a more corrupt world, with poverty and theft, and realism. The film is about expression. Perhaps that is the point of the young girl at the beginning, who turns out to be deaf, and playing charades with her classmates. It’s slightly confusing, but tense enough to hold your attention throughout.

Haneke’s most successful work followed his 2005 feature, Caché (Hidden). He proceeded to direct an American remake of his acclaimed 1997 film Funny Games, this time starring Naomi Watts and Tim Roth. After returning to Europe, Haneke made the brilliant The White Ribbon in 2009, and earlier this year won the Palme D’or at the Cannes Film Festival for Amour.
Posted by IG at 9/30/2012