THE DECLINE OF THE AMERICAN EMPIRE (DENYS ARCAND, 1986) 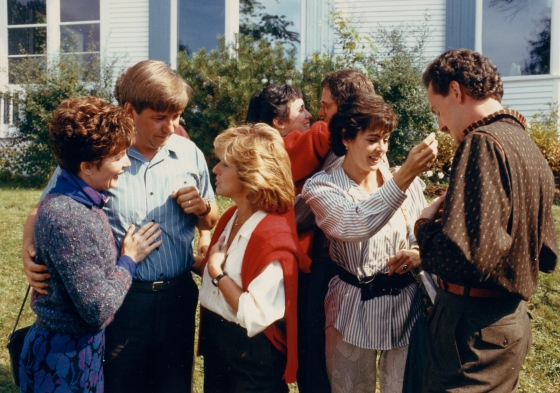 The Decline of the American Empire is a French-Canadian comedy that was nominated for the 1986 Academy Award for Best Foreign Language Film. The premise is simple--eight characters, four male, and four female, discuss the most personal details of their private lives during a getaway at a summer retreat. At first, they all seem normal. They all have jobs, marriages, they own homes, and enjoy successful careers. Once the topic of sex is brought up however, all the secrets come spilling out. The film then delves into a satirical exploration of the dark philosophy of marriage, relationships, homosexuality, and infidelity.

Written and directed by Quebec-native Denys Arcand, the film was a smash hit in Canada, and at the Cannes Film Festival, before turning up as a nominee at the Oscar ceremony in 1987. Arcand would lose the award that night, but 17 years later, he would triumph for The Barbarian Invasions, winner of Best Foreign Language Film, and nominee for Best Original Screenplay, in 2004.

The unusual title points to the decline of American society, but it actually deals with the social and sexual liberation of Quebec of the 70s and 80s, a culture shock that overthrew centuries of social control exercised by a predominantly conservative Catholic church. The script is written with a very witty, and dark sensibility. The characters are shallow, but charming, and their stories are interesting and funny. Consider this film a French-Canadian impression of a Woody Allen film.

The Decline of the American Empire deals with sensitive themes, beautifully explored by a great ensemble cast playing a great script with heart, no pretension, and to great result. It is a film about aging. It is about men and women who, feeling their youth slipping away, try to grab moments of desire, however singular, in order to  escape the thought of growing old. It is a sad film, with each character dealing with a certain kind of private turmoil which we find out about very personally. The film plays like a soap opera. We know its not real but we're sucked in anyway. We start to care for the characters, we're happy when they're happy, we're sad when they're sad. If you like a good farce, with dark humor and real emotion, check this one out.
Posted by IG at 8/01/2012