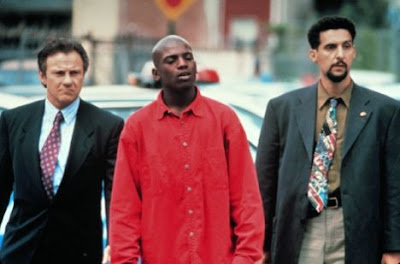 Spike Lee's Clockers might be the best film of his varied career. Released in 1995, it is very much a movie of its time. The clothes, the music, the style is very true to the culture of the 1990s. It is also a very gritty, and realistic portrayal of drug dealers, poverty, and murder in the projects, and the police officers whose job it is to put an end to it all. Set in the heart of Brooklyn, it’s exactly the type of film that only edgy, risk-taking directors like Lee or Martin Scorsese can make. And indeed, the movie was set to be directed by Scorsese at first, but he left to make the De Niro-starring epic Casino instead. Marty nonetheless shared a producer credit on the film, while Lee stepped in to direct. Lee also co-wrote the script with Richard price, author of the book it was based on, who won a nomination at the 1986 Academy Awards for Best Screenplay for Scorsese’s The Color of Money.

What makes Clockers such a great film is primarily due to the amazing cast. Headlined by a slew of New York character actors including Harvey Keitel, John Turturro, Mekhi Pfifer, Keith David, and Michael Imperioli, it also stars Delroy Lindo, Isaiah Washington and Regina Taylor. The cinematography lends itself to the story and unique vision of Spike Lee, and the tension throughout the novel and script is felt every moment in the movie. Consider Clockers a succeeding film to Lee’s Do the Right Thing from 1989. It is a movie that deals with the relationship between young African American men living in poor neighborhoods, and the older, white cops who try to put an end to the murder and drug dealing that goes on in the area.

Clockers is simply an ultra-cool film. Anytime you get together this kind of cast, with Keitel, Turturro, Imperioli, Pfifer, Lindo, etc., you know it's going to be a wild ride, but still able to maintain a seriousness that is rare in films today. It's funny. It's been 15 years since this movie came out. You could technically call it a classic film, and yet the story and characters feel as fresh today as they did in the 90s. Give credit to the great job that Lee, and Price did with the story, and the powerful acting put forth by the cast. It's definitely not one of Lee's most famous or popular films, but I give it two big thumbs up.
Posted by IG at 1/19/2010