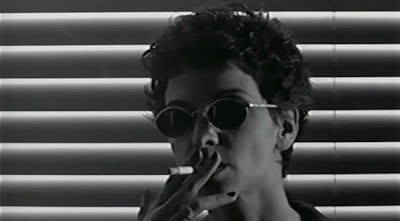 Abel Ferrara is a unique filmmaker. He is best known as being a maestro of independent, hip, artsy, and edgy cinema. I first discovered his films when watching Bad Lieutenant. I sought out Bad Lieutenant film for several reasons. First, it stars Harvey Keitel, who always chooses edgy, challenging work. Second, it’s an infamous NC-17 rated film noted for its violence and grittiness. Third, I wanted to get into Ferrara’s films and figured the best way to start is at the top. And it’s an amazing film. Keitel has never been better. It is as if he was born to play these kind of troubled, and dark characters. You may remember he played the lead in Scorsese’s Mean Streets, a young Italian torn between his hoodlum buddies and his girlfriend who urges him to go straight, or from Taxi Driver where he played the seedy pimp of a young Jodie Foster or maybe you know him from Quentin Tarantino's debut film Reservoir Dogs, where he played veteran jewel thief, Mr. White.

I next sought out Ferrara’s King of New York. A movie which precedes Bad Lieutenant by only two years, it feels like the latter is a companion piece to it. King of New York stars Christopher Walken as a gangster who gets out of prison and wants to get back on top of the food chain with the help of an absolutely amazing cast including Laurence Fishburne, Steve Buscemi and two rival cops played by Wesley Snipes and David Caruso.

But the movie I really want to discuss is Ferrara’s 1995 bizarre, yet brilliant vampire movie, that’s right, vampire movie, The Addiction. I had little idea what this film was about heading into it, all I knew was, it was directed by Ferrara, it was written by Nick St. John who has written many of Ferrara’s films including King of New York, and it starred Lili Taylor, Chris Walken, Michael Imperioli, Edie Falco and Annabella Sciorra. That was enough for me to buy a bootleg version of the film, because as we speak, it has yet to have an official DVD release. The movie is about vampires, but don’t be misled, it is probably the most subtle vampire movie I’ve ever seen in my life. Of the 82 minutes that the movie lasts, I think I was only sure I was watching a movie about vampires about 60 minutes into it. Maybe it’s my fault, maybe I missed something that others did not, but considering this is an Abel Ferrara movie, known for making gritty films about seedy cops, gangsters and criminals, I wasn’t expecting this to be about the blood sucking undead.

But it is about so much more than that. The film takes place in modern day 1990s Manhattan. A female graduate student is bitten by an attractive older woman on the street one night. She suddenly develops a thirst for blood and then decides to infect her professor, her best friend, and others while still trying to figure out who she is and what she’s become. I think that’s what makes this movie so special. The lead character might be a vampire itching to kill, but she is also a person who questions morality. After all, it is her major in school. You see, while the movie centers around vampires, it also cleverly discusses the history of evil, with the Holocaust and Vietnam in particular, and the moral decisions that one makes in ones lifetime.

There are many things that make this movie stand out. For one, it is unlike any other vampire film ever made. The vampires here, though hurt by sunlight and crosses, do not perish at the sight of either one. The lead character also walks around in broad daylight, albeit with sunglasses on, but manages not to melt like other vampires do in other films. The cinematography is brilliant, of course, I don’t think Ferrara would have it any other way. Although he’s made several films in New York, I don’t know if he’s ever covered the unique landscape of the city the way he does so in The Addiction. Shot in black and white (get it? The history of evil is… black and white.), it is a gorgeous portrayal of the city that accompanies an equally original and fresh story. I wish everyone could see it and understand why it’s so good. It’s an underrated film because it’s very dark and disturbing, but also because it’s mostly unavailable. But if somehow you are able to get your hands on it, I wouldn’t miss the opportunity to see it.
Posted by IG at 1/22/2010