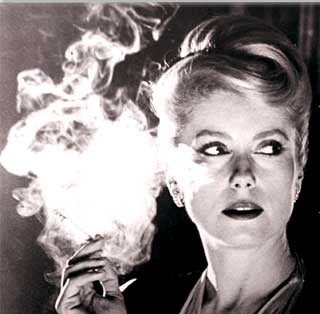 I might have a new favorite movie. The Hunger is… something that I don’t think I’ve ever seen before in my life. I tend to say that a lot, about once a month, but that’s because there are a lot of truly great films that go unnoticed. And The Hunger is definitely one of them. Sure, it is perhaps not a movie that is completely buried in the annals of movie history. It does star Susan Sarandon, Catherine Deneuve, and David Bowie, and it is the directorial debut of current Action-movie maestro Tony Scott.

The Hunger shares a common thread of story to the previous film I discussed, Abel Ferrara’s The Addiction. The Hunger centers on a beautiful vampire, played by Deneuve. Her lover, who has lived for hundreds of years as well, is played by David Bowie. And they make a great couple in the film. The chemistry is really perfect, mainly due to the European exoticism of both actors.

The film is many things. It’s a true and true product of the 1980s with its super-cool hairdos, fashion and most of all, music. Although, I must mention that despite a stand-out rock track that opens the film in a very visceral and surreal manner, a large portion of the music is also classical and used to perfection, almost in a operatic-way. The movie plays out like an opera. Two vampires look for blood every week. Then one day, one of the vampires, played by Bowie, begins to age increasingly to the point of death, and seeks the aid of a doctor who specializes in aging, played by Susan Sarandon. What ensues is a thought-provoking series of events that shakes the core of cult moviemaking. Along with the amazing cinematography, and sexy eroticism of Sarandon and Denueve who engage in a lesbian sex scene at one point in the film, the film deals with the darkness of life, death and loneliness that people face, but through the eyes of a sexy, and stylish female vampire.

I was shocked when I saw this film; I really didn’t know what I was in for. Tony Scott, whose older brother is Ridley Scott, director of films of varying degrees such as Alien, Blade Runner, Thelma and Louise, and Gladiator, has progressed since his debut in 1983 into a primarily commercial director. He helmed the later 80s classic Top Gun, and in recent years has directed several Denzel Washington pictures including Man on Fire, Deja Vu and The Taking of Pehlman 1 2 3 remake. However, The Hunger is a unique piece of cinema on his resume. The film has a heart and a soul and a brain. The movie is alive, and its heart beats strongly for 96 consecutive minutes.

The movie is very stylish, as noted before, and still maintains a level of sophistication and intelligence. Like Ferrara’s The Addiction, the vampires here are unlike any other vampires you’ve met in other films. They are not affected by crosses or daylight, and they do not live forever. In fact, most of the vampires in this film die off after a few centuries. The Hunger mixes many different genres; drama, romance, and psychological horror among them, as well as featuring a tasteful depiction of predatory female vampire sex. They sure don’t make ‘em like this anymore.
Posted by IG at 1/30/2010