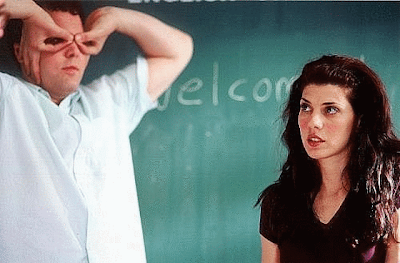 The beginning of this past decade saw a lot of great films. One of them is Brad Anderson’s peculiar romantic comedy Happy Accidents. It is a strange, strange film. In simple, superficial terms, it is a fusion of a classic Woody Allen film, and a typical Philip K. Dick novel, peppered with a little bit of David Lynch-ian absurdity. Happy Accidents is highly original, thought provoking, creative and wildly imaginative.

The film stars Vincent D’onofrio as Sam, and Marisa Tomei as Ruby, two New Yorkers who meet and fall in love almost instantly. However, over time, Ruby begins to notice a lot of Sam’s idiosyncrasies and they go beyond what we typically consider to be bad habits. He says strange things to himself in his sleep. Sometimes he just spaces out for seconds at a time, as if stuck in a momentary haze. Eventually, Sam reveals what it is that causes these things and makes him seem so peculiar. You see, Sam, is a time traveler. He comes from the year 2470, and has decided to travel back in time to the present day to seek out a woman he saw in a photograph in the future. And that woman happens to be Marisa Tomei.

I hate to reveal the twist of the film, but Sam’s revelation comes about a third of the way through the film, and, well, if you are interested in the film, pretty much every plot summary will mention that. However, I was one of the lucky ones who did not read up on the film beforehand and was pleasantly surprised to see such a mind-bending spin on an old-fashioned story of romance and comedy.

Aside from the fascinating little storyline by writer/director Brad Anderson, who would later gain fame for his shocking thriller The Machinist, the acting in the film is what stands out to me. Vincent D’onofrio was perfect for his role, as the awkward, slightly attractive, but overall bizarre person who claims to be a person from 470 years into the future. But despite his efforts, it was Marisa Tomei that shined the most. She really understood the character, who is on the one hand, a pretty young woman looking for love in the all wrong places, and yet hates to let go because she’s done it so often in the past.

Brad Anderson definitely has a way with constructing complex stories around simple settings and locations. Happy Accidents is a wonderful film. Charming, witty, funny, smart, and inventive. It's one of those films that doesn’t have wide appeal because, at its core, it’s just so weird. You’re not sure what to believe. There are so many questions and you’re not sure whether there are answers to those questions or not. I must voice my disappointment, however, at the ending. I think a film as refreshing as this one deserved a better conclusion, but I don’t blame the filmmaker for ending it the way he did. Overall though, it’s a really cool little film, and I highly recommend it.
Posted by IG at 2/15/2010