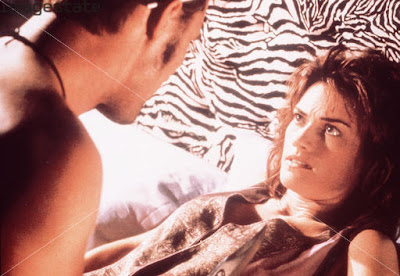 Before I write any further, I’d just like to say that the story behind the making of this film is what led me to review it, not the actual quality of it, although there is much to discuss concerning the content, it is more of the unique history of the film that concerned me.

Dust Devil is not a particularly great film. It’s a good film, but not great. However, I felt compelled to discuss it because of the unique and crazy story behind the making of the film. First I’d like to travel back to 1992. Richard Stanley has directed the film Dust Devil, a haunting account of a murderous drifter who travels the desert. The film was essentially taken away from Stanley, and without his permission cut up by the studio into an 87 minute feature film that was released in 1992. Stanley, a year later, bought back the rights to the film, and in 2006 finally released his original vision, a 114 minute film entitled Dust Devil: The Final Cut: Work Print.

What makes this 114 minute version which I saw so unique is that Stanley, limited only to whatever remaining scraps and material was left when he bought the film back from the studio, did not use edited material in the final film. What he did use was fresh footage straight from the camera, still in its grainy, unedited form. Basically, Stanley used whatever shots remained in the studio’s possessions. These shots were not meant to the see the light of a movie screen, these shots still included a time counter on the bottom of the screen, like the one you see when you first shoot a scene on film, before it goes to be edited and polished for the film. And that is what makes this movie experience so unique. The director basically used unpolished and bare footage mixed with the polished and edited scenes included in the theatrical studio version. I’ve seen one or two movies in my life, but I have never seen such a piece of cinema before. Now, as for the movie itself, it was a fine film.

The arresting visuals express the fact that the director chose to focus most of his time and energy on the beautiful, yet surreal landscape of the film, rather than on the character or story. Stanley has stated in several interviews that the idea for the movie came to him in a dream when he was still in film school and took many years to finally realize his dream, literally. Miramax studios, although known for acquiring and releasing some of the most thought provoking and original films of the late 1980s and 1990s, who discovered such commercially viable, and acclaimed filmmakers as Steven Soderbergh, Quentin Tarantino and Robert Rodriguez, bought the film for release in 1992, and ended up with a film that was almost a full half hour less than Stanley’s Final Cut: Work Print version. It is difficult to judge this film based on its merits and lack thereof. It is a film that was plagued by studio interference, missing scenes that would have helped piece the film together more smoother, and many years of editing and more editing.

Over the course of cinema history, there are countless numbers of films that have had similar stories. A director has a vision, ends up with an interesting film that is not held in high regard by the people who financed it, the film ends up getting cut up into pieces, either for the rest of time, or until years later when the director gets the desire to release his own version of the film. Other famous examples of this are Ridley Scott's Blade Runner, and Richard Kelly's Donnie Darko, although the latter is probably more enjoyable when viewing the shorter, theatrical edit.

When Dust Devil was initially released in ’92, one critic said the movie was “Tarkovsky on acid”. Now, I don’t think the movie was on acid or comparable to Tarkovsky’s greatest work, but Dust Devil is nonetheless a bizarre, dreamy, and visually enticing film. Call it “David Lynch-lite”.
Posted by IG at 2/21/2010