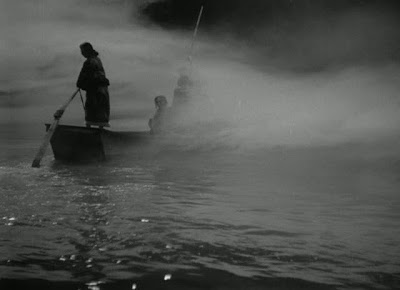 Ugetsu is a beautiful and moving Japanese film from renowned director Kenji Mizoguchi. It is not an action film. It is not fast-paced. It will not appeal to all, but it is nonetheless a poignant and thought provoking classic movie.

Mizoguchi is best known for this film, and for his follow-up released a year later, Sansho the Bailiff. Sansho the Bailiff deals with two young children, a brother and sister, who are separated from their mother, kidnapped, and forced into slavery at a labor camp.

Ugetsu, also known as Ugetsu monogatari (many Japanese films at the time had the term “monogatari” at the end of its title, it means “story” or “tale”) was released in 1953. Based on a novel of the same, published in 1776, the film deals with two couples who get separated after war breaks out in 16th Century Japan. One husband manages to meet and fall in love with another woman who harbors a dark secret. His wife and child are left to fend on their own. The second husband becomes a famous samurai, while his wife is reduced to being a prostitute. The film is an example of the brutally depressing and harsh films that Mizoguchi was capable of making in his career.

It is a film for all senses of the mind, body and soul. When you go to the movies, you tend to only use two of your senses. Your sense of sight and your sense of sound. You cannot touch a film. You cannot taste it. You cannot smell it. But with a few, rare movies, they become more than just cinema, they become spiritual experiences. Ugetsu is a film that moves you in a manner than is ethereal. Take for instance, the scene on the water, before the couples are separated, and are on their way to escape on a boat. It is a gorgeous sequence, both because of its cinematography, and because of the haunting song being sung by one of the wives.

Often compared to his fellow contemporary Japanese filmmakers Akira Kurosawa and Yasujiro Ozu, Kenji Mizoguchi’s work often features more personal stories of hardship and anguish. His films span generations and feature many characters. Kurosawa is probably most famous for his samurai pictures like Seven Samurai and Yojimbo, while Mr. Mizoguchi tends to dwell on stories that center around regular people who are faced with despair and misfortune throughout their lives.

This is a film about fate, fantasy, misguided love, and true beauty. It is a magnificent piece of classic Japanese cinema, but sadly overlooked, and has not become as famous and popular as other Japanese films from the same era. That is probably due to the fact the film is incredibly gloomy and routinely offers no hope to the characters or, more importantly to us the audience watching the film. But, in any event, to be able to move a person to tears or sadness through cinema is a rare talent. And Mizoguchi does not fail in that regard at all. I give this film two big thumbs up.
Posted by IG at 2/26/2010