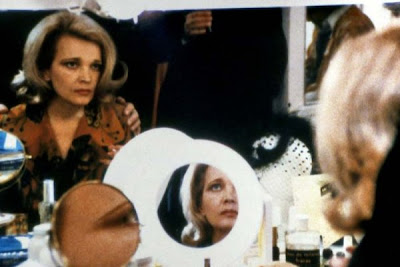 What I really want to discuss is his masterpiece, Opening Night. Cassavetes might be better known for directing films such as 1968’s Faces, 1974’s A Woman Under the Influence, or his debut, Shadows, released in 1957, and then re-edited and re-released to better acclaim in 1959. But it is Opening Night that feels like the peak of a great cinematic career. It centers on an actress, played brilliantly by Rowlands, who is in the process of having a mid-life crisis and nervous breakdown while performing in a play in the heart of New York. Watching the film, and the play being performed in the film, you never know when you’re watching Gena Rowlands, or the character in the film, or the character in the play within the film. Cassavetes cast himself opposite Rowlands as the husband in the play, while Cassavetes-regular Ben Gazzara plays the production’s producer, nervously trying to hold the actress together during a successful run of the play. Rowlands is magnificent. It is as if she and her husband performed the play within the movie in real life and then simply re-staged it for the film. The lines between the film and the play within it blur constantly. It is the distinct reason why the movie makes such an impact on the viewer. Not only are you trying to pay attention to the characters in the movie, but you must also focus hard on the play, which shares a parallel storyline of hopelessness and despair with the characters in the reality of the film.

Opening Night is one of the longest films Cassavetes ever directed, clocking in at 144 minutes in length. It is evident that he poured in his heart and soul into the film, and was almost speaking to the audience about himself as a filmmaker and as a human being, as well as about his wife as an actress and as a human being. At one point in time, his character in the play says to Rowlands (the wife), “You wanna’ get drunk? You wanna’ take dope? You wanna’ go out with some guy at 4:00 in the afternoon? Go ahead. That’s your problem. You want to be young again, don’t you?” It is a heavy and deep film, one that stands out in a long career that was cut short in 1989, when Cassavetes died at the age of 59 from cirrhosis of the liver.

There is a lot to say about this film, but it is difficult to explain or to put into words. There is so much in this movie to take in and dissect. You must see it to truly understand its incredible emotional impact.
Posted by IG at 6/22/2010