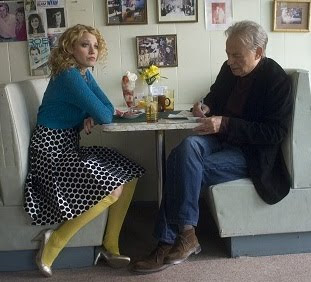 The Private Lives of Pippa Lee is an appropriate title for a wonderful film directed by Rebecca Miller. Released in 2009, the indie flick centers on a 40-ish, still pretty, blonde wife and mother who moves into a retirement village with her much older husband, played by the always amazing Alan Arkin. Despite the 30 year age difference, they have great chemistry together as husband and wife. While she adjusts to this new life, she begins a strange friendship with the son of a neighbor, played by Keanu Reeves. Wright-Penn (or is it just Wright now?) plays the title character of Pippa Lee, a woman who slowly begins to lose her sanity and occasionally drifts back on moments of her life. Pippa’s mother, who is portrayed by Mario Bello, gives a standout performance in very little available screen time. In fact everyone does. The cast is stunning. In addition to Wright-Penn, Arkin, Reeves and Bello, you also have supporting roles from Winona Ryder, Julianne Moore, Monica Bellucci, Zoe Kazan, Mike Binder, and the absolute best surprise of them all, Blake Lively, who plays Pippa as a teenager, and who falls in love with a 50-ish Arkin and marries him.

It is quite possibly the best written drama of the last 18 months. Although it got no love from the Academy (not surprised there. They rarely reward the best films anyway), it did make quite a splash on the indie circuit. The film is in fact, based on writer/director Rebecca Miller’s book of the same name. Miller is of course married to the two-time Oscar winner Daniel Day-Lewis, who starred in Miller’s last effort, The Ballad of Jack and Rose, released in 2005.

Pippa Lee excels where others fail. It manages to hold our attention, even though it jumps back and forth between time periods and characters, which is mostly comprised of a core of (very talented) female leads.

The story is so nicely woven together, almost like a beautiful piece of fabric. It is so pleasant to simply listen to the characters talk as if they really exist, and not just speak as if they are in a play or something. Of course, when you deal with such professionals as Alan Arkin and Robin Wright-Penn and Rebecca Miller, you know you will receive a good package.

It is Blake Lively, however, that held the center of my attention the most. Watching her onscreen was a pleasure. A real pleasure. She was only 21 or 22 years old at the time of filming and yet she gave a mature and provocative performance. Her career will go to far depths if she continues on this path. Although, with limited knowledge of the business, it is difficult to surmise what outside influences are really controlling her career choices at this time. In any event, we will always have The Private Lives of Pippa Lee. A career high for several of its stars. And one of my favorite films of 2009.
Posted by IG at 8/03/2010