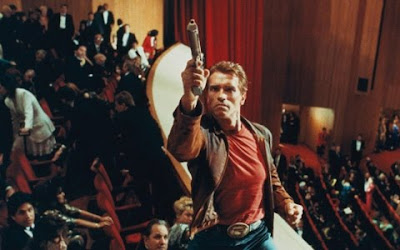 Last Action Hero might feel like a weird choice to be added to a list of underrated films, but I think it’s worth the distinction. This is one of those action movies that tried to be an innovator in its genre instead of being a typical explosion filled cliché machine. Ironically, it is explosion filled, and it does feature a crazy number of clichés, but that’s the point. It’s a very self mocking action picture. And it’s also a movie within a movie. How many times have you seen a high profile action movie starring one of the most famous a recognizable faces with a concept like that?

Directed by John McTiernan, known best for helming Die Hard and Die Hard 3, Last Action Hero was originally conceived by a couple of college friends including Zak Penn who would later pen several X-Men movies, excuse the pun. A big budget film which notoriously flopped at the box office, it is ultimately plagued by two elements of production. The shots and the cuts. Some of the shots look as if they shot for a low profile television show or commercial. And the editing was awful. There were tons of shots that should have been taken out, but due to pressure from the studio boss, the movie was cut in just two months, not nearly enough time to produce a blockbuster of this large a magnitude.

Schwarzenegger at the time was the biggest star in the world, pulling in $15 to $20 million a picture. He decided to take a departure from serious sci fiction films such as Total Recall and Terminator 2 and focused on a high concept action-comedy where he would be portraying a thinly veiled version of himself.

Filled with cameos from stars such as Sharon stone, Jean-Claude Van Damme, Schwarzenegger’s wife Maria Shriver, Jim Belushi, and Robert Patrick (who starred opposite Schwarzenegger in Terminator 2), Last Action Hero is a movie about movies, the clichés we all know and expect, and the obsession the public has with movies and celebrities in general.

The most significant reason for this movie’s failure at the box office and with critics as well, is that the audience never had the desire to see a movie about a movie. They don’t want to see death and explosions within another film. People watch this film and essentially the fourth wall is broken and that scares people because it breaks the illusion that film provides us with.

This film was a big risk for those involved. Schwarzenegger’s star managed not to drop too far off after the release of this film. He quickly followed it up with his third venture with James Cameron on the hugely successful action-spy thriller, True Lies.

McTiernan went on to direct Die Hard 3 just two years later; it ended up being one of the most successful installments of the popular series. The concept, however, has never managed to scratch the surface of celluloid again. Because as this film proved, people don’t want that illusion broken for them. They need the movies. They need it for entertainment. For fantasy value. For escape. For some, Last Action Hero was a neat twist on an old formula. For others, it was a failed experiment that did not ultimately satisfy. Either way, it is a unique piece of action cinema, and definitely worthy of a second look for those who have not thought of it in several years.
Posted by IG at 8/10/2010