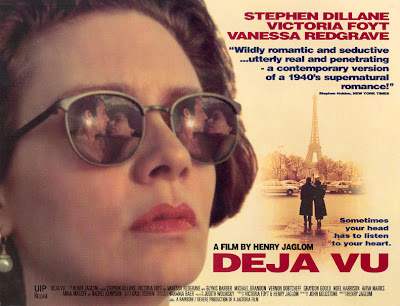 Déjà Vu is an odd film. It is almost magical. At first glance, you will see a simple film. A simple film about simple people set in simple times. In fact, I will admit, reading about the film beforehand, it sounds a bit boring. It is a typical romantic drama of two married people who meet by chance and fall in love.

That is the log line when viewed from afar. When you dig deeper, you will find a fantastic and warm film about people just like you or me or anyone else really.

Dana Howard is an antique shop owner and travels around the world looking for new artifacts for her store. On a business trip to Israel, she has a chance encounter with a strange, but lovely woman who approaches her and tells her of a story of when she was a young girl during the war, and falling in love with an American GI. The love affair was not to be, however, the woman leaves behind the only artifact that still remains from the relationship, which was one half of a pin. The woman leaves for a moment, and suddenly Dana realizes that things are not what they seem to be. For example, sitting behind her were two female soldiers. But as the woman left, suddenly two completely different people appeared out of nowhere and claim to have been sitting there the whole time. Thus begins, a unique and fascinating journey to find the woman, which leads her to meet a British man who sweeps her off her feet.

Déjà Vu is a love story, yes. But it is a love story in the classic sense of the term. A movie that feels not of its time, the 1990s, but of another time and place. A movie that belongs in that great era of movie-making in the 1930s and 40s. The “golden age”, as they say. The entire movie can be better represented by a story told by one of the characters midway through the film.

The story goes that when Katherine Hepburn was a young lady, before she became a movie star, and the most famous actress in the world, she was once in a car, being driven by her driver. On the way to their destination, the driver needed to stop off at a store to buy some things. So, they stopped off, and the driver went inside. And Katharine remained in the backseat of the car. A few moments later, another car pulled up a few feet away from Miss Hepburn’s car. The backseat passenger of that car rolled his window down and a young man peered out. A very good looking man. The two of them glanced at each other, just glanced, and the whole world just stopped. Nothing existed anymore. Nobody existed; it was just the two of them. And later in her life, Katharine Hepburn said that she knew at that moment, that they were meant for each other. That he was made specifically for her, and she was made specifically for him. But the driver returned, and they drove off. And she never saw him again. Katharine Hepburn lived to be 96 years old. She was quoted as saying that not a day went by that she never thought of that young man, never thought of what could have been. The point of the story is also the point of the movie, and might also be a way of explaining true love and the purpose of existence in general. Sometimes in life, you are presented with an opportunity. A rare opportunity. And you have two choices: you either go with it and see what happens or you ignore it and perhaps end up regretting it forever.

Déjà Vu is an amazing and unique film and even if only one person reads this and watches it, I will smile and know that this film had an impact on at least one other person than myself.
Posted by IG at 8/23/2010