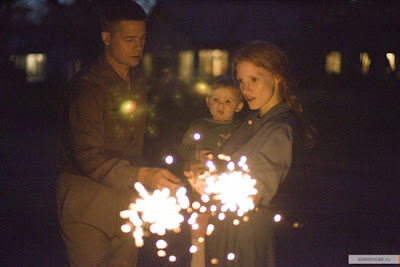 What is The Tree of Life? In biblical terms, it is the plant from which Eve was enticed to eat the apple from, who later seduced Adam into breaking God’s first request of them, which was not to touch apples from the tree. In modern terms, it is the title of renowned director Terrence Malick’s new film. The Tree of Life is many things. It is a quiet and unnerving movie experience. At some points it is magical and at others it is at a standstill. The film finally showed its face last night at the Cannes Film Festival, a screening that has been highly anticipated and consistently postponed for several years. Filmed in 2008, Malick chose to take his time on post-production, working on several complex sequences that featured CGI.

The Tree of Life, in simple terms, is a simple film disguised as a multi-layered one. Malick has been directing since 1973, yet this is just his fifth film. He broke out onto the scene in the 1970s with Badlands and Days of Heaven and then didn’t make another film until 1998, when his epic Vietnam-set film The Thin Red Line garnered seven Academy Award Nominations, including two for Malick. His next film didn’t take quite as long to make, although it was seven years before he released The New World, a visually-stunning and lyrical variation of the tale of Pocahantas.

The Tree of Life stars Brad Pitt and Jessica Chastain as parents bringing up their three boys in the 1950s. We learn early on that one of the children dies at nineteen, and then we are transported back to the beginning of it all. And I mean, literally, the beginning of the world and life itself. What follows is the highlight of the film, and what I would call the cinematic equivalent of pre-ejaculation. It is a fifteen-minute long sequence that will remind audiences of Stanley Kubrick’s 2001: A Space Odyssey, a film that dealt with the origins of life and the meaning of time and space. Malick uses this amazing, mind-altering sequence to tie together his meditation on God and faith with the story of fatherhood, and adolescence. Unfortunately for the audience, once the sequence is over, the film continues by going back to the beginnings of the family at the center of the film, and does not return to more ambitious storytelling. Malick, after all, is a visionary, not a storyteller. He is the intellectual’s version of James Cameron, a filmmaker who wants to amaze you with beautiful images never seen before. If this was his goal in the past, then he succeeded with flying colors. He has succeeded again, presenting a film that has such rapturous, dreamy cinematography, one must remember to completely clear one’s mind before entering the theater, in order to make room for the dizzying array of images one is about to encounter. The Tree of Life is a film that requires patience and, more importantly, an open mind from its audience.

Disappointment came when the film immensely slowed its pace down, and when it was clear that Sean Penn, despite being in all the posters and trailers for the film, only had the most minor role in the film. Don’t be fooled by his name in the credits, he is featured in the film for about ten seconds, and has absolutely no lines. Call it a silent cameo, if you will. The real stars of The Tree of Life are Chastain, who plays the mother of the boys and Pitt, who plays a disillusioned husband and father. Pitt’s character is a manager at a factory who had ambitions to be a musician that dissipated over time, and whose various patents are continuously rejected. He raises the boys with an iron fist and is undermined routinely by the eldest boy, the one who eventually dies years after the action in the film concludes. Chastain portrays the emotional, young wife and mother of three with poise and elegance. In between the action, we see images of Sean Penn, one of the sons all grown-up, presumably in present day, working at his office, and then wandering around a desert, perhaps in a dream-state, looking for his brother and parents. Hunter McCracken is also excellent, playing the younger version of Sean Penn's character. 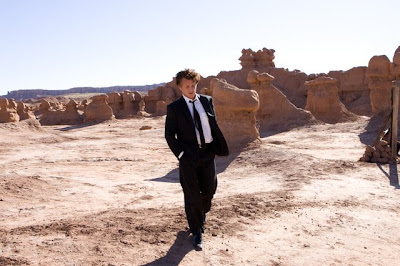 Malick has always been known to be a perfectionist, a filmmaker who focuses on what the eyes see and the ears hear. The music used in the film, all classical, is beautiful and makes one feel like they are watching a film from another time period or another planet altogether. The fact that Malick had the audacity to make such a film is commendable. It is slow, thought –provoking, surreal, and enigmatic. Of course, Malick, being from another generation of filmmakers, uses his name and recognition from the past to create a film that encompasses more than the sum of its parts. I am excited to see the reaction of the public and critics once it is released. It will certainly stir emotions and create debates that will last a lifetime.
Posted by IG at 5/19/2011