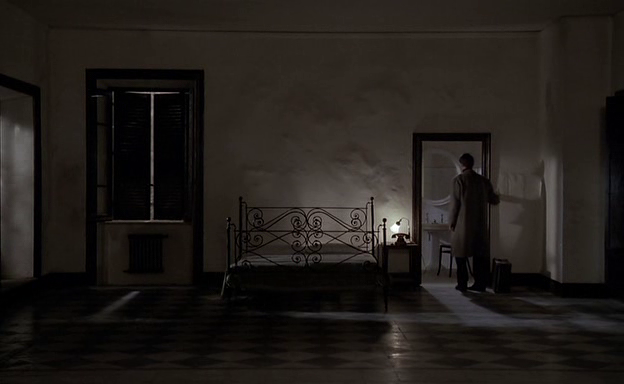 Great artists typically take painstaking measures to ensure their work is carefully measured out and executed before being delivered to audiences. In the late 1970s, Andrei Tarkovsky, a noted filmmaker who might be Russia’s most beloved of all directors, was essentially kicked out of his native country and forced to work in other European countries. He was only able to direct two films outside of the USSR, before his untimely death in 1986. The first of these films is Nostalghia, filmed in Italy, and released in 1983.

It is clear from the opening image, that the film would be another soul-searching, thought-provoking effort by Tarkovsky. The change in landscape and language did not affect his ability to direct a film which you could literally pause at any moment and find yourself staring at a painting created by a major artist.

Tarkovsky’s facility to combine sounds and images is a gift very few filmmakers have possessed. His early work such as 1962’s Ivan’s Childhood and 1966’s Andrei Rublev show an emerging talent who had reached a level of maturity far beyond his age. His talents culminated in the 70s with haunting works of art such as Solaris, Zerkalo (The Mirror), and Stalker, his final films in the USSR. Nostalghia is a continuation of the themes Tarkovsky visits and revisits in his work – memories, death, nature, adolescence, God, faith, and motherly love. 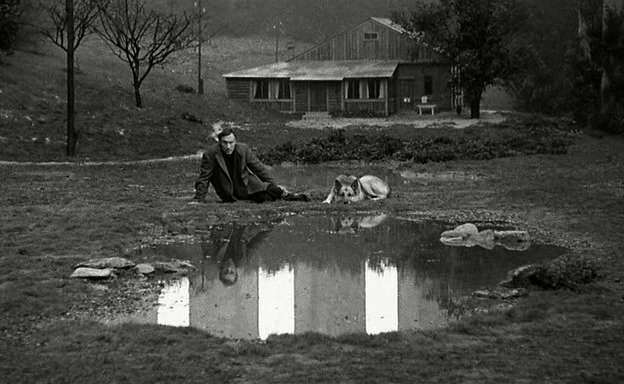 The story is about a Russian poet and his female colleague who visit a small Italian town. There, they encounter an aging Italian man who lost his mind years prior and locked himself and his family up in their house for seven years, until they were finally discovered and taken away from him. The poet befriends this man and is asked to fulfill a great deed – to enter a sacred body of water with a candle in hand, which the old man believes will save his town from damnation.

Tarkovsky’s films are sometimes reminiscent of work of other acclaimed filmmakers. Solaris can be seen as the Russian answer to Stanley Kubrick’s 2001: A Space Odyssey. Nostalghia remains very much Bergman-esque, very dark and very surreal. The lead character, Andrei, is haunted by dreams and nightmares of a past life which seem to intersect with the controversial past of the man he befriends. Frequent Bergman collaborator Erland Josephson, stars as the deranged old man. Josephson would also star in Tarkovsky’s last film, The Sacrifice, released in Sweden in 1986, the year of Tarkovsky’s death. 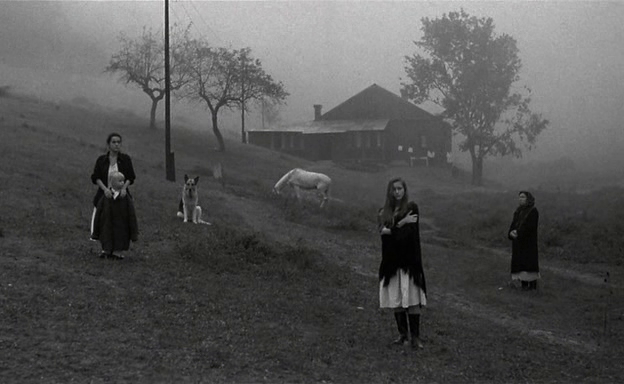 Italy has always been known as a historically rich country, and Tarkovsky manages to elevate the splendor and beauty of the country by carefully photographing characters and well-chosen locations. He also manages to highlight otherwise insignificant objects such as a puddle of water or a lit candle or a bottle standing on the ground growing lonelier as time passes. He takes objects that are usually taken for granted not only in film but in life, and puts them in the throes of the spotlight, as if asking the audience to give their attention not only to the things we typically expect to see in a film, but also these little things, the things we never pay attention to in life, the things that hold a lot of beauty when taken out of context.

Also starring Oleg Yankovsky as the poet, and the beautiful Domiziana Giordano, in her film debut, Andrei Tarkovsky’s Nostalghia takes us on a spiritual trip that makes destinations at the bottom of our souls and at the top of hidden mystics we were unaware existed. This is the work of a master filmmaker, and the culmination of a brilliant career cut short a mere three years later.
Posted by IG at 5/23/2011