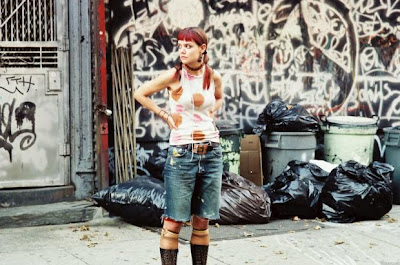 One recent late Friday night, I decided to pop in a DVD lying around on the table where my television used to sit (it has since gone on to TV heaven). I popped it into my DVD player and sat back, relaxed, and was pleasantly surprised to find that Pieces of April is a tiny budgeted, hand held shot, independent little gem starring a load of talented actors, and helmed by a successful novelist turned screenwriter, turned director.

In just under 80 minutes, writer/director Peter Hedges, fresh off an Oscar nomination for Best Screenplay for About a Boy, managed to create a very sentimental and poignant family drama, done in a very traditionally untraditional manner. Starring Katie Holmes, Pieces of April centers on a rebellious 20-something girl who invites her family over for Thanksgiving dinner. She lives with her boyfriend, played by Derek Luke. Her mother, Patricia Clarkson (in an Academy Award nominated performance), plays her cancer-stricken mother, soon to die. They have never gotten along, and this complex mother-daughter relationship or lack thereof is at the heart of this story.

Oliver Platt, who portrays the titular April’s father, trying to hold the family together, leads a great supporting cast. Her sister is played by a wonderfully annoying Allison Pill, and rounding out the celeb-filled cast is Sean Hayes, of Will & Grace fame, who plays April’s strange neighbor.

Part of the movie’s success is that it falls into many genres and categories. It’s a food movie, for one. It’s all about food, preparing food, discussing food, eating food. Food has always been a form of bringing people together, and it is the tool used to bring this dysfunctional family together for the most important meal of the American year. It is also a Thanksgiving movie. The film is set entirely during the last Thursday of November, traditionally celebrated as Thanksgiving. The food being hastily prepared is a turkey that can’t find an oven to be cooked in, once April’s stove break down.

The screenplay was written by Peter Hedges, who also directed the film. Hedge is most famous for being the author of What’s Eating Gilbert Grape, which was turned into an acclaimed film in 1993, starring Johnny Depp and Leonardo DiCaprio.

Pieces of April was shot on a shoestring budget, less than what most small indie films are shot on. Each cast member sacrificed a significant portion of his or her usual fee to be a part of the project. The film was also shot digitally, which gives it a very realistic and urban feel to it. It was around this time that digital filmmaking had really taken off, and more and more filmmakers were given the opportunity to make their films their way with small, digitized cameras that allowed filmmakers to shoot movies on the cheap.

Pieces of April succeeds where many other simple, independent films do not. It has a warm, and affecting and well-written script. It also features a brilliant cast who managed to create a very serious film filled with humor and wit. It is the result of very fine skills and talent, and is one of the best independent films of recent years.
Posted by IG at 8/13/2011