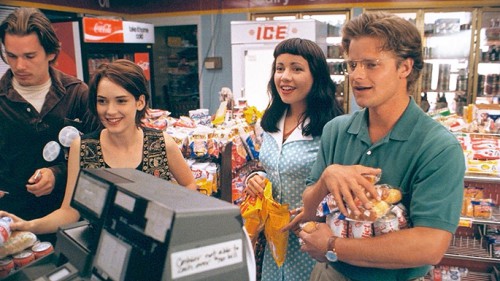 Reality Bites follows Lelaina, played by Winona Ryder, a recent college grad who works as a TV production assistant. Her best friends are Vickie, played by Janeane Garofalo, Sammie, played by Steve Zahn, and Troy, the wannabe artist in love with Lelaina, played by Ethan Hawke. Reality Bites is a movie about its time. And because the 1990s were considered the Generation-X, Reality Bites came to be the defining film of Gen-X. Like The Graduate did for the peace and love generation, Saturday Night Fever did for the disco era, and The Breakfast Club did for the 80s, Reality Bites explains what its like to be a young adult living in the 90s. The film was directed by one of its stars, Ben Stiller. At the time, he was most famous for being comedian Jerry Stiller’s son and for creating The Ben Stiller Show, which became defunct after two years on MTV.
A lot of the narrative is told through video interviews as part of Lelaina’s attempt at a documentary on her friends and contemporary culture.  She expresses her distaste for consumerism, and yuppy-culture. She dates Michael, played by Stiller, a young executive who lacks the charm and bravado of the outspoken musician Troy. Stiller does a convincing job as an actor, and does better as a director, perfectly capturing that period in time when Michael Bay music videos and Big Gulps were the most prominent features of pop culture. Independent film was riding huge waves after the success of small-scale filmmakers like Robert Rodriguez and Kevin Smith. Studios were more open to young, first time filmmakers, eager for fresh material. Jersey Films, the production company of actor Danny DeVito, produced Reality Bites. The company came to prominence in the 90s producing successful films like Pulp Fiction, and Out of Sight. 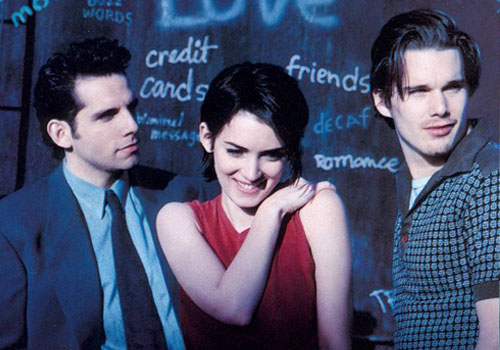 Reality Bites also had a hip soundtrack featuring the music of Squeeze, The Knack, Peter Frampton and Lisa Loeb. Ryder was the quintessential it-girl of the 90s. Her breakout role was in the high school dark comedy Heathers, chronicling life as a teenager. She also worked with top directors like Tim Burton, Martin Scorsese, Francis Ford Coppola, and Woody Allen. Hawke used his turn in Reality Bites as the cynical and artistic rebel to propel himself to the A-list. He went on to star in indie hits like Before Sunrise, and Gattaca, as well as more commercially successful fare like Training Day, which got Hawke an Oscar Nomination.

Films about contemporary youth culture stretches back to 1955 when James Dean  and Natalie Wood starred in Rebel Without a Cause. 1955 was also the year Dean perished in a head-on collision with another car while driving down Route 41 in California. 39 years later, Reality Bites made its debut at the Sundance Film Festival. People immediately identified with its themes of confusion and alienation following graduation from college. The film, however, hasn’t aged well. Times have changed, and today, more than 18 years later, our culture is worried less about HIV exams and VHS tapes and more about their Facebook accounts and the latest iPhone app. 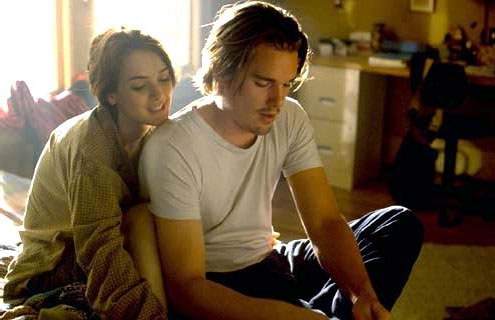 What, then, is the defining film of our generation? Is there one defining movie that we can say truly captures the reality of culture today? Perhaps its difficult to find the right script or the right actors whose collective voice can define a generation. But in 1994, brought together by that magic potion whose ingredients are kept secret by the movie gods, a group of characters came together to produce a charming and funny look at people trying to break out into the new world. Looking back today, the film is still relevant to all of us who are in similar positions, the only difference being it’s 2012, and not 1994. The same could be said about other culture-defining films, like the aforementioned The Graduate or Midnight Cowboy or anything by John Hughes. The problems are the same, but the clothes are different.
Posted by IG at 6/17/2012