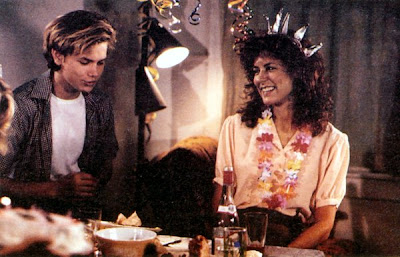 Sometimes a great movie finds a successful formula because of its components. Because it’s done in a unique or stylish or funny way. Other times, a film makes an impression on you simply because it is a great reflection of life. Running on Empty happens to be all of those things.

One of the very first films I covered for this blog was a Sidney Lumet movie – the 1981 police thriller Prince of the City, a film that was unaccepted by critics and audiences 30 years ago, and still hasn’t received the attention it deserves. A few years after that film was released, Lumet directed another interesting movie, about a family on the run from the law, and it is the film that I have decided to discuss today.

Sidney Lumet was born in 1924. He directed television in the 1950s before making his big screen debut in 1957 with the smash hit, 12 Angry Men, which was up for Best Picture at the Academy Awards the following year. Lumet continued to direct throughout the 60s but failed to re-capture audiences the way he did with his big debut. It took almost two decades for Lumet to find success again, but the 1970s were very kind to Lumet. He produced several masterpieces including the 1973 Al Pacino drama Serpico. He followed it up with Murder on the Orient Express, based on the novel by Agatha Christie, starring a host of famed actors at the time. In 1975, he re-teamed with Pacino on Dog Day Afternoon, another critical and financial success. In 1976, he directed Network, perhaps his most famous work, which narrowly lost the Best Picture Oscar that year to the underdog film Rocky. His career took a detour the next several years, after releasing clunkers like The Wiz, an all black remake of The Wizard of Oz, and Deathtrap, a suspense thriller starring Christopher Reeve and Michael Caine. But Lumet kept making movies, and in 1988, he directed one of his best, Running on Empty.

Starring Judd Hirsch, Christine Lahti, and River Phoenix, Running on Empty centers on a family of four who have been fleeing the law all their lives. The parents, played by Hirsch and Lahti, are former liberation army members who are wanted by the FBI. Instead of turning themselves in, the duo run from the law, with their two kids in tow, to avoid them. The family settles into a small New Jersey town where Phoenix’s character is approaching high school graduation and decides he wants to utilize his musical talents and go to nearby Julliard for college. This of course would disrupt the family circle, which is further complicated by the fact that he falls in love with Martha Plimpton, who happened to be Phoenix’s girlfriend in real life (they met on the set of the Harrison Ford movie The Mosquito Coast two years prior).

This is River Phoenix’s career role. He participated in several high profile films such as 1986’s Stand By Me, as a young Indiana Jones in the third installment of the series, The Last Crusade, in 1989, and the Gus Van Sant coming of age drama My Own Private Idaho in 1991. He continued to act over the next several years and garnered a lot of attention for his acting prowess. On October 31st, 1993, Phoenix walked outside of the club The Viper Room, and died of a drug overdose. He had turned 23 years old two months earlier. His brother Joaquin Phoenix, several years younger than River, is a two-time Oscar nominated actor.

Sidney Lumet is now 86 years old. His last film, Before the Devil Knows You’re Dead was released in 2007. Given his age and poor health, it is probably the last film he will ever direct. Lumet’s most famous works are the gritty movies he made in the 70s and early 80s filmed on the streets of New York. The city was a playground for several groundbreaking filmmakers in the 70s and 80s, like Martin Scorsese, John Cassavetes, Woody Allen, and later on, Spike Lee and Abel Ferrara.

Running on Empty is not your typical family drama about domestic disputes. It is a sharply written film that stimulates the mind and touches the heart. The chemistry between Phoenix and Plimpton is extraordinary and gives no hint that what we are watching is a movie, a play, something planned and pre-ordained. Their exchanges are as real as life itself. The movie left me with a smile on my face, because I knew that Lumet had delivered another winner. I made myself discuss the film today because it would be a real shame not to. It’s that good.
Posted by IG at 12/23/2010