WHAT EVER HAPPENED TO BABY JANE? (Robert Aldrich, 1962) 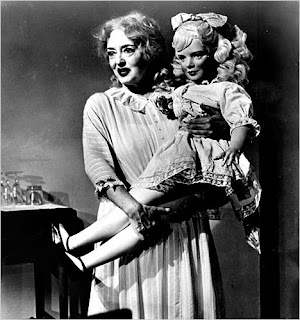 In one of my previous entries, a reader remarked how surprising it was that certain films, chosen by me, were amongst other films that were categorized as being underrated or generally unrecognized. Today, I’m going to discuss a little bit about a film holds a certain infamy, and some might question the authenticity of it being a film that holds place as an understated one, when in fact, it is a much celebrated and Oscar-winning production. The reason why I think this movie deserves mention as an underrated film, is because it has been miscategorized as a melodrama, when it should really be categorized as a horror film. In fact, I would probably list this film as one of the most frightening horror movies ever made. The movie I am referring to is Robert Aldrich’s 1962 film What Ever Happened to Baby Jane?

The film stars two classic, golden age actresses, Bette Davis, and Joan Crawford. The two legends were in the twilight of their careers when this film went into production and studio chief Jack Warner even remarked that he "wouldn't give a plugged nickel for either one of those two old broads." The two old broads, however, were cast in the lead roles and the film, on release, became a hit and scored several Academy Award nods including one for Best Actress in a Leading Role for Bette Davis.

What Ever Happened to Baby Jane? deals with the Hudson sisters, one a former child performer and the other a former Hollywood actress who retired early due to an accident, supposedly perpetrated by her jealous sister, leaving her paralyzed for life. Baby Jane, the former child star, is now an old maid, with a gloomy, wrinkly face, whose lips cover a glass of whisky at every moment of the day. Blanche, her sister, is dependent on her, even though she is to blame for the accident and the end of her career. There are more secrets to reveal before the curtain falls on this picture, but be sure that this is a rather difficult film to watch. Although not initially recognized as such, this is a highly unnerving horror film.

This is, however, a horror film that does not depend on physical violence to scare audiences. This is not a horror film in the way we've become accustomed to it. This is not a slasher film like Halloween, it is not a sci-fi horror film like The Thing, or a tentpole film like Saw. This is a horror film of the mind. It is a psychologically disturbing film. At several moments, I simply could not watch, giving me a sense of claustrophobia, because I was unable to change the actions on screen, there was no way to right the wrongs because what I was experiencing was a fantasy, a piece of cinema, a piece of fiction, nearly 50 years in age.

In real life Davis and Crawford were bitter enemies, a known fact all throughout the world of celebrity and press. In one scene, Davis’ character had to kick Crawford’s character in the face. Bette Davis did it for real. Crawford, in retaliation, would put heavy stones in the pockets of Davis’ costumes making scenes more difficult for her. On Oscar night, Crawford promised fellow nominee Anne Bancroft that if she won, she would accept it on her behalf in case she could not make it. Crawford ended up accepting the award, and walked past castmate Davis telling her shrewdly “I have an Oscar to accept.”

What Ever Happened to Baby Jane? is a shocking film that left me perturbed, and uneasy. The images are hard to forget, the actions are hard to visualize again. But it is an essential film for the serious film student or aspiring filmmaker. This is cinema at its best.
Posted by IG at 2/12/2011