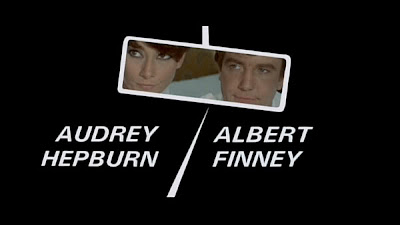 Sometimes, a movie will not age well, and in time, become a misrepresentation of itself. Stanley Donen’s 1967 classic Two For the Road is exactly that. The film stars Albert Finney, in one of his finest roles, and Audrey Hepburn, in what would be one of her last performances on film. It trails the funny, sad, and turbulent relationship between them over a ten-year period. During that time, they fall in love, they start a family, they move up the social ladder, they have affairs, they separate, and inevitably end up at a crossroads together.

It is an extremely well written film, whose author, Frederic Raphael won an Academy Award in 1965 for the Julie Christie satire, Darling. Raphael also achieved notice in the late 1990s, while collaborating on the adaptation of Arthur Schnitzler’s 1926 novel Traumnovelle, or Dream Story. The screenplay that followed resulted in the film Eyes Wide Shut, Stanley Kubrick’s final masterpiece.

Raphael even wrote a book about the experience of working with such a master director in the novel Eyes Wide Open, a play on the title of the film it’s experiences are associated with. Kubrick died in March of 1999, several months before the film and book were released, thus not given the chance to refute the travesties written in Raphael’s memoir.

Two for the Road however is a brilliant analysis of a relationship from start to finish. That’s the thing with a film. It is born when you press play. It dies when the screen is black again. It doesn’t die per se, it simply sails off into the sky and you usually never hear from it again unless there’s a sequel. Brilliantly filmed and edited by a group of all-around talented Brits, and starring two enormously talented performers in Finney and Hepburn. Audrey did not make another film for nearly a decade after the release of this film. When she returned to acting, she starred in only four more films, before passing away in 1993. Finney meanwhile has collected five Academy Award nominations along the way to present day. His last high profile role was in the Tim Burton film Big Fish.

Two for the Road is a brilliantly well-crafted examination of two people who fall in love and marry and endure many hardships along the path to happiness. It is therefore not surprising that Kubrick chose Raphael for Eyes Wide Shut. Mr. Raphael has a unique sense of the emotions of people and the up and down lives of married couples who’ve been together for some time. He wrote Two For the Road when he was only 35, meaning his insights into love and sex and marriage were way ahead of his experiences, which means he simply possessed a rare talent, which I think is front and center in this piece.

After careful examination, you might even call this one of the great wit-infused romance dramas ever made, alongside other films like His Girl Friday, Annie Hall and When Harry Met Sally. It has an incredibly bold and radical style of filmmaking, alongside a story that broke barriers that went unnoticed because it was released the same year as other barrier-breaking films like The Graduate and Guess Who's Coming to Dinner.

Two for the Road is most importantly a fearless movie. It was not afraid to discuss openly the sex lives of a married couple. It had no reservations about demoralizing marriage in the modern day. It of course benefited from being released in the late 60’s which was an era of radical moviemaking and helped give birth to intelligent films like this one. One that, with retrospective in hand, can be clearly seen as an inspiration for a generation of filmmakers that followed.
Posted by IG at 3/16/2011