Spartacus is a spectacle to watch on the big screen, an epic film with a once in a life time cast, who were lucky enough to take direction from not one but two great filmmakers.

In 1959, Ben-Hur swept the Academy Awards and was a box-office sensation, and remains one of the most classic films in cinema history. Kirk Douglas, one of the biggest stars of the 1950s, was considered for the film but director William Wyler chose to go with Charlton Heston instead. Douglas was offered the role of the villain in the film, but he refused to play second fiddle to Heston, so he rejected the role and the film went on without him. The rest is movie history.

Douglas, still feeling burned by the events, decided to pursue his own epic movie project, and thus was born, the grand tale of Spartacus on the big-screen. Based on a novel by Howard Fast, Douglas pursued the making of the film single-handedly. He hand-picked blacklisted writer Dalton Trumbo to adapt the book into a screenplay, and also chose to work with acclaimed director Anthony Mann. The cast was enormous – Laurence Olivier, Charles Laughton, Tony Curtis, and Peter Ustinov all co-starred alongside Douglas, who might have given the best performance of his storied career.

Problems started on the film when Douglas clashed with Mann, and after several weeks of production, decided to have him replaced. When the studio asked what director he’d like to work with, Douglas chose the young filmmaker who directed him several years before in the acclaimed Paths of Glory, Stanley Kubrick. Kubrick had never directed a big budget film of this magnitude. He had directed four films, all independently financed, all under the creative control of Kubrick. Spartacus, however, was his big chance to make a name for himself where it really mattered – Hollywood. Kubrick was hired, and the film’s production continued. The shoot was gruesome and long, as were all of Kubrick’s productions. Lasting nearly a year, the actors became so frustrated that at one point Tony Curtis, himself a big star at the time, was reported as saying “Who do I have to screw to get off this film?” 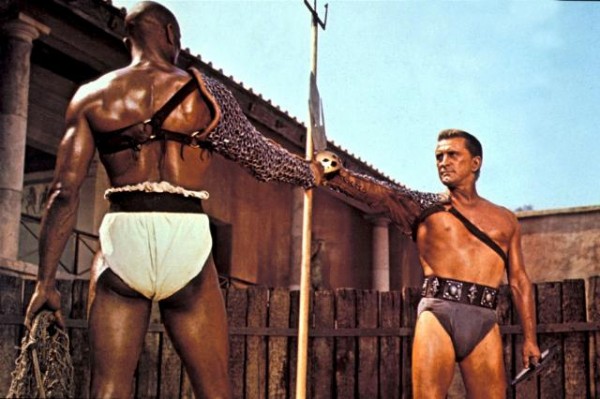 Kubrick clashed with everyone including Douglas, as well as the director of photography, Russell Metty, who would go on to win the Academy Award for best cinematography. He also clashed with Trumbo, and asked Peter Ustinov, who would occasionally write for film, to re-work some of his scenes in the film. Trumbo at the time was notorious for being blacklisted in Hollywood and worked under a front, thus he couldn’t have his name in the credits for the much-anticipated film, and Kubrick offered to have his name listed under the writer credits instead. After this sly move, Kirk Douglas was infuriated and used his clout in the business to fight for Trumbo’s name to be included in the credits, and essentially ended the Hollywood blacklist when he was successful at doing so.

The film was an enormous success, making more than five times its budget in box office receipts. It was also nominated for six Oscars, winning four, including one for the brilliant Ustinov for his supporting role. The film has few errors, except its length. It is an overlong film, one that exceeds the time required to tell its story. The original version was 184 minutes long, with several scenes cut due to censorship issues. In 1991, historian Robert A. Harris restored the film and added in several key sequences that were originally deleted, including a scene between Olivier and Curtis that has subtle homosexual undertones hidden beneath an impeccably written conversation between the two about “oysters and snails.” This restored version, which has now come to be the generally accepted one, runs 197 minutes in length. The climax of the film ends too early, and instead we are subjected to another thirty minutes or so of characters contemplating their fates, with the inevitable conclusion prolonged to an unnecessary extent.

This was Stanley Kubrick’s one and only Hollywood film. After the difficult experience of working with a large studio system with little control on the script and the post-production phase, he retreated to England, where he subsequently directed all of his films and remained living there until his death in 1999. It should be noted, however, that Spartacus should not exactly be considered one of Kubrick’s classic works, lacking the Kubrick touch he became famous for in later years. It is more of a Kirk Douglas film than it is a Stanley Kubrick film. It is the only film he was hire to direct, it is the only film he made in Hollywood, and it is the only film in which he did not write and/or produce.

Spartacus did help launch Kubrick into another stratosphere of filmmakers. The financial and critical success gave him the opportunity to make films on his own terms and allowed him to call all the shots on his projects. Douglas never succeeded in making films on the same level as when he collaborated with Kubrick twice in the 50s and early 60s. Kubrick, on the other hand, went on to achieve massive success, garnering 13 Oscar nods throughout his career, and an impressive resume of classic films still being discussed and analyzed to this day. Spartacus remains one of the early testaments of the glorious career of one of the grandest filmmakers that ever lived.
Posted by IG at 6/03/2011