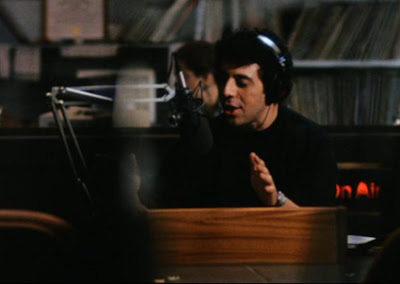 "You're afraid of the bogeyman, but you can't live without him."

Talk Radio is a 1988 dramedy starring and co-written by Eric Bogosian who took direction from Oliver Stone straight off his Oscar-winning Platoon and Oscar Winning Wall Street. The movie is not what you'd expect. Its a talky, thought-provoking satire (and/or farce) about radio-talk-show hosting, but more importantly about the perks and hazards of celebrity. Stone does a modest job shooting this film, which was based on a claustrophobic play by Bogosian himself.

The cast is a particularly special one, with great 90s performers in their younger 80s days. Alec Baldwin stars as a hot-shot radio show producer, and John C. McGinley plays a disc jockey. As for Bogosian, while his story resonates strongly with the audience, and the writing is pretty sharp, he simply doesn’t belong in front of the screen. There are theater actors and there are screen actors. Steve McQueen was a screen actor. Eric Bogosian is a stage actor, and his wit and intelligence cannot defeat the fact that he is not a leading man in a serious tragi-comedy such as this one.

Released at the tail-end of the 1980s, it weighs in on topics that concerned America during that time period. The 80s were concluding and everyone was analyzing its influence on the world. The 60s brought Vietnam and the sexual revolution. The 70s brought Watergate and disco music. The 80s always seemed to lack in terms of cultural influence, a decade most remembered for big hair bands and the invention of the franchise movie.

Being a film based on a stage play, the most important factor of Talk Radio is naturally its script and dialogue. The writing is top notch and hits on major topics such as racism and anti-semitism as well as giving an opinion about love, death and the dangers of being a celebrity, particularly a controversial one.

While watching this film, one evokes memories of Howard Stern with his big, poofed up hair parading around his radio station trying to excite his co-workers, guests and most of all -- his audience, by performing weird and wild segments on the air. Bogosian’s character, Barry Champlain, is similar with his no-holds barred tactics, and controversial approach to radio.

In the end, the film leaves you with a bad taste in your mouth. Nobody wins, nobody loses (although this can be debated), and the audience is left wondering whether there was anything to be won or lost in the first place. It doesn’t matter of course. Its not the end result that matters, it’s the journey you take that people most remember. Talk Radio is one of those movies that you have to be in the mood to watch. But it is definitely worthy of a rental on a rainy night. Instead of reading 30 or 40 pages of your new book, or catching a few re-runs of The Simpsons, check out this late-80s forgotten gem. It might pleasantly surprise you.
Posted by IG at 7/26/2011